Danforth Drake and Margot Mallard are minor characters in Tiny Toon Adventures. They are a young, snobby duck couple who attend Perfecto Prep in Acme Acres. Danforth is friends with Roderick and an unnamed male horse character, and together they play sports for Perfecto Prep, usually competing (and cheating) against Acme Looniversity. Margot is a cheerleader for Perfecto Prep along with Rhubella and an unnamed female cow character. Danforth and Margot are voiced by Rob Paulsen and Katherine Soucie, respectively.

In The Acme Bowl, Roderick and Danforth use Margot to seduce Plucky as well as promise him enrollment at Perfecto Prep for the Acme Loo football playbook, provided Perfecto wins the game. After she complains about her task, he reminds her of the imminent victory and how she could crush Plucky later. She is intrigued with this and kisses her boyfriend. Perfecto ends up losing anyway, as Plucky had been given them a fake playbook. In actuality, Plucky's defection had been masterminded by Buster Bunny in order to fool the Perfecto team.

In The Wacko World of Sports, Danforth and Margot (in shorter stature and a different hairstyle) appear in the "Bleacher Bummer" segment.

In the Son of The Wacko World of Sports episode segment, In Buster at the Bat, Danforth is a baseball player for Perfecto Prep. In Acme Acres Summer Olympics, Margot appears alongside Rhubella Rat as the competitors for the synchronized swimming event. They are up against Acme Looniversity competitors, Babs Bunny and Shirley the Loon. Although Margot and Rhubella are much more successful at the event, Babs gets the medal for some reason.

In the Viewer Mail Day segment, Out of Odor, Margot appears in a girls basketball game between Perfecto and ACME. 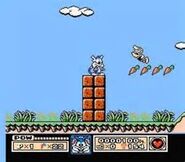 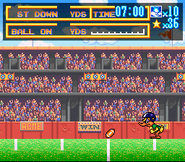 Danforth in the football level of Buster Busts Loose

Retrieved from "https://tinytoons.fandom.com/wiki/Danforth_Drake_and_Margot_Mallard?oldid=42973"
Community content is available under CC-BY-SA unless otherwise noted.