Fifi working at the box office

"Keep your stubs, AND NO THEATER-HOPPING!"

...with Hamton providing the wind for his sail

"Check it out, crew! Top score of Carrot Crunchers!"

"We interrupt this broadcast to bring you a special report."

"It must really be important to cut in on a video game."

"You mere mortals run and hide while... I use my superior powers to save you! I am woman, hear me roar."

"Let's see, I save Buster and those other guys, and the malevolent miscreant plunging us into peril is none other than the weacherous Wex Wuthor!" 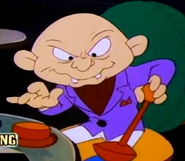 With this machine, I will wipe out all of Acme Acres!

"And as soon as Acme Acres is inked out, I'll simply repaint it as..."

"Wutherland, the Unhappiest Place on Earth! With plenty of free parking."

"It's time for high-impact aerobics with me, Jane Bunda!"

"And so, Wex Wuthor restores Acme Acres to its original scenic beauty."
Add a photo to this gallery

"Please deposit all trash in the receptacles provided in the lobby."

"Wait till' you see this film! It's superlative! It's smashing! It's stupendous! It's..."

"These are the voyages of the Starship ACME."

"No, a new toupee. This one's all stringy. Ugh!

"I'm only three and a half years old."

Spork is not amused when Captain Quirk takes his idea

Shirley, Sweetie, and Saul all walk away 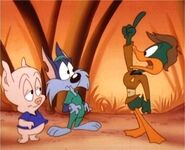 "Stand back, men! I'll waste him with my secret weapon!"

"It's working, Spork! The planet is actually worrying itself bald!"

"Eh, it's a living."
Add a photo to this gallery

"Someday I gotta get me a plane."

Unknown to Harris, Pasadena has whipped onto his tricycle

In their struggle, Pasadena and Harris rip the map in half

The Temple of the Secret of Life

Buster and Monty get chased by a giant 8-ball

Buster discovers the secret of life

Monty rings the bell at the top of the movie board

"Aloha!"
Add a photo to this gallery
Retrieved from "https://tinytoons.fandom.com/wiki/Cinemaniacs!/Gallery?oldid=46855"
Community content is available under CC-BY-SA unless otherwise noted.