This game was an attempt to turn players of video games into directors. It also enabled them to completely control the direction of the cartoon by also making them into screenplay writers, music composers, cinematographers, and set decorators.

Up to two characters can be featured on screen at once, with Buster Bunny, Babs Bunny, Plucky Duck, Furrball, Calamity Coyote, and Little Beeper available for selection. The characters can be set in many different poses and situations, and the cartoons have a myriad of settings and backgrounds for the show to take place. There are also options for musical inserts, sound effects, captions, and editing features using an easy-to-use graphic user interface that resembles a watered down version of most Windows 3.1 applications.

Saving the cartoon is not possible, however, unless one uses a VCR or other screen capture method (including uploading the cartoons on YouTube or other video websites). Cartoons created on the game are only five minutes long. 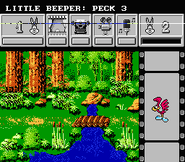 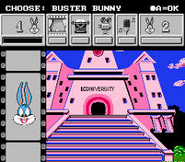 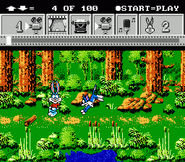 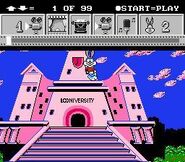 Add a photo to this gallery
Retrieved from "https://tinytoons.fandom.com/wiki/Cartoon_Workshop?oldid=32772"
Community content is available under CC-BY-SA unless otherwise noted.