Byron in a conceptual artwork with Montana Max

A rare close-up animation cel of Buster, Babs and Byron for the movie How I Spent My Vacation
Add a photo to this gallery

Byron saves Buster and Babs from falling over the waterfall 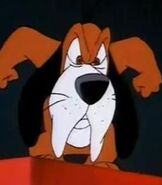 Babs, Byron, Buster and Banjo are being chased by Mr. Hitcher

"Woof."
Add a photo to this gallery

Byron in a red dress

Byron is wearing a collar

Byron wearing a purple dress while trying to escape from Elmyra

Byron's ears are tied up while wearing a pearl necklace

Byron in the closing credits of Toonenstein: Dare to Scare
Add a photo to this gallery

Retrieved from "https://tinytoons.fandom.com/wiki/Byron_Basset/Gallery?oldid=43560"
Community content is available under CC-BY-SA unless otherwise noted.