"You guys the pizza people?"

Ralph the guard and Robin Williams as Peter Pan

"Biff and Buffy Vanderbunny from Journey to the Center of Acme Acres."

Buster and Babs can't get into Steven's office

The people waiting outside Steven's office

Stephen in a rather intense video game match

"Hello, Renee? I wanna talk about a rewrite."

Buster presents his contract to Renee, Sarah, and Amy

"I'm sorry. Each passenger is only allowed two pieces of carry-on luggage. You'll have to check the others!"

"You're not supposed to be here!"

"Attention, peasants! For lunch, we're pleased to offer you lobster or filét mingion!

"What'll it be, grey lumps in brown sauce or brown lumps in grey sauce?"

"Let me guess, you guys ate the carrot chips, too?"

Shirley and Fifi greet Buster and Babs at Hawaii

"Come back! I have so much love to give and so many cars to rent!"

Babs wonders where Buster got the Acme Express card

"We interrupt this very special episode of Tiny Toons to bring you a more special report."

A special report on Q-tips

"There you are, Hippety-hop. Wanna play Treasure Island with me, huh?"

"Ptooey! Expect a call from my agent!" 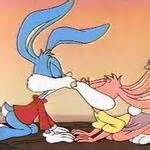 Buster and Babs are about to kiss each other

"You guys were great! What a wonderful show! Thanks!"

"About this credit card bill..."

Gag Credit: Please mail your unsolicited manuscripts along with a self-addressed, stamped envelope to - Some other show!

End Tag: "Aloha!"
Add a photo to this gallery
Retrieved from "https://tinytoons.fandom.com/wiki/Buster_and_Babs_Go_Hawaiian/Gallery?oldid=46122"
Community content is available under CC-BY-SA unless otherwise noted.