Buster Busts Loose is a video game for the Super Nintendo Entertainment System released in 1993 by Konami.

This game features Buster Bunny in a side-scrolling adventure that takes place in many different areas. Unlike most of the other Tiny Toon video games, this game has no specific storyline/plot, and most of the levels are not in continuity with each other. In short, it's like an episode of Tiny Toon Adventures with episode segments, if it were adapted into a video game. The game has three difficulty settings - "Children" (easy), "Normal", and "Challenge" (hard). On the easy mode, the levels are significantly reduced in size (as noted in the synopsis below), and the boss battles are omitted. In the hard mode, Buster must start each level with only one health unit. If hard mode is cleared, animated sprites will appear during the credits. Passwords are used for easy mode, but are surprisingly omitted from normal and hard modes.

As the game begins, Buster realizes he is late for class and dashes off, despite Babs' warning of the escaped animals within. Over the course of the level, Buster continually encounters what appear to be numerous purple-colored clones of Perfecto Prep student Roderick Rat, as well as frogs and crabs (obviously the escaped animals Babs mentioned). Midway through the stage, Buster will drop into the darkened art room and destroy a statue of Montana Max, prompting the appearance of the mini-boss, Arnold the Pit Bull. When Arnold is defeated, he drops a key which gives Buster access to the elevator leading to the next part of the stage, the cafeteria. At the end of the stage, Hamton tells Buster that Dizzy Devil is destroying the kitchen. This segues into the boss fight (which, along with Hamton's appearance, is skipped in the Easy difficulty mode), where Buster has to jump under the conveyor belt on which Dizzy is standing so that nine total pieces of food are consumed by Dizzy. Every so often, Dizzy will spin and destroy the conveyor belts, making feeding him more of a challenge.

The next stage is the set of a western movie being filmed, which Montana Max claims he is the star of. The first part of the stage has Buster walking through the town, encountering enemies such as the Coyote Kid from the episode, High Toon and, for some reason, Barky Marky. At one point, he will need to jump rope ten times (the rope moves faster in the hard mode). After jumping rope, he will then enter a five-story building. On the top floor, he catches Max in the act of stealing money from a vault. Max jumps out the window and Buster follows.

The second half of the stage (skipped in the easy mode) is an auto-scrolling stage that has Buster chasing after Max on a runaway train. Here, the dash move comes into full force, as at one point the train goes into a low tunnel, forcing Buster to dash over the tunnel's mountain in order to catch up with the train. This is followed by a run-in with Silas Wonder (as a mini-boss) and his minions from the episode, Sawdust & Toonsil. The end of the level places Buster on the front car of the train, where the smokestacks are on fire as the train is out of control. Once Buster makes it past the smokestacks, he catches up with Max, who is now begging for his help. The level ends with the two of them jumping onto a hand car and pumping it hard enough to get away from the train, eventually reaching 88 miles per hour and zooming off leaving a fire trail (in a reference to Back to the Future).

After clearing the previous stage, it starts to rain, so Buster seeks shelter in a seemingly-abandoned mansion, which he notes is an obvious cliché. The enemies here consist of ghosts (from the Return of the Acme Acres Zone episode segment, Boo Hoo Hoo), two-headed monsters (from the wraparounds of the episode, Stuff That Goes Bump in the Night), evil cakes (from the You Asked for It, Part II episode segment, Little Cake of Horrors), and a vampire mini-boss (from the Stuff that Goes Bump in the Night episode segment, Fang You Very Much). When played on the easy difficulty, the stage ends after the third room, but if played on the normal or hard modes, Babs will appear at the end of the stage to tell Buster that her friend, Melvin the Monster (from the episode "Hare-Raising Night", but not referred to by name in the game itself) has been captured and taken under the control of the stage's boss, Dr. Gene Splicer (also from "Hare-Raising Night", but referred to as the Mad Scientist in the game itself). In the boss fight, Melvin will throw light bulbs and screwbolts at Buster, the latter of which Buster must kick so that they hit Splicer's machine, eventually destroying it and thus freeing Melvin.

This stage, based on the episode, The Acme Bowl, is set in a football game between Acme Looniversity and Perfecto Prep (suspiciously not called by name in the game), with the score at 10-14. Buster is the star receiver on his team and must run the ball 100 yards over the field to score a touchdown and win the game. Plucky Duck, Hamton, and Furrball accompany him here as the team's quarterback, center, and defense, respectively. The Perfectoids will try to tackle Buster as he runs with the ball, and he can only be tackled four times for every ten-yard section of the field. The player can choose to either have Buster simply run with the ball, or have Plucky pass the ball and Buster catch it. The latter method is preferable, as if the player successfully catches the ball, it will have cleared eight yards, and the Perfectoids cannot hurt Buster until he actually has the ball. This stage has a time limit that varies depending on the difficulty mode - 15 minutes on easy (with the clock pausing whenever the ball is fumbled), 7 on normal, and 4 on hard.

For this stage, Buster goes up into the sky to retrieve an item that Calamity Coyote accidentally left up there. The item is the script for the next episode (which will lead to the final level of the game). Buster climbs about the stage by jumping onto bubbles (provided by Hamton in a plane), balloons, and pinball flippers. The only enemies in this stage are some buzzards who assault Buster while he's flying on a blimp which appears to be promoting the cartoon itself (it later pops and Concord Condor airlifts Buster to the next part). Once Buster finds the script, the sky palace where he currently is begins to fall apart and he has dash up the walls and avoid falling off the screen. This stage is skipped completely on the easy mode.

Based on the episode, A Quack in the Quarks, the game's final stage is an outer space setting where Buster plays "a Knight of Honor" who has to rescue Babs, who is in her Princess Leia-based attire. The enemies are all based on characters who appeared in the episode as well, with the exception of robots who appeared in the Return of the Acme Acres Zone episode segment, Real Kids Don't Eat Broccoli. On the easy mode, the game abruptly ends after the second room, where Buster must avoid giant laser beams by hiding behind barrier walls. The final boss is Duck Vader, also from A Quack in the Quarks (although here, he is simply a costumed Plucky, whereas on the show, he was a completely different character), armed with a paralyzing ray gun. To defeat Vader, Buster must knock his flying saucer away from said gun and then kick the gun around so that its rays hit Vader's ship.

In between stages, the player will be presented with a bonus stage format. It will feature Buster and Babs on a roulette called "Wheels o' Game" (a.k.a. "Roulette"), much like the episode, The Wheel o' Comedy from the series. This portion of the game offers five mini-games in which the player can gain extra lives for the regular game. Landing on a specific character's face will result in that bonus game. By entering Elmyra Duff, Shirley the Loon, and Calamity Coyote, respectively, at the password menu, you can access these bonus games anytime. They are: 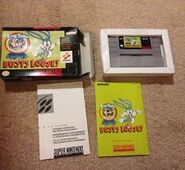 The contents of the North American game 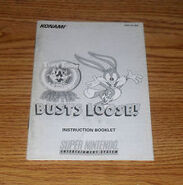 Back cover for the Japanese box art

The back cover for the German release

The back cover of the PAL version

The Korean SNES along with the cartridge for Buster Busts Loose

The back of the Team Blockbuster trading card, featuring game tips, including one that erroneously refers to Melvin the Monster as a robot
Community content is available under CC-BY-SA unless otherwise noted.
Advertisement