She may be best known for her television roles as Iola Boylan in Mama's Family and as Gunnery Sgt. Alva Bricker in Major Dad. She also appeared in two episodes of Married... with Children as Miss Hardaway. 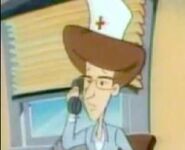 Ms. Heberly #1
Add a photo to this gallery
Retrieved from "https://tinytoons.fandom.com/wiki/Beverly_Archer?oldid=44459"
Community content is available under CC-BY-SA unless otherwise noted.