Banjo the Woodpile Possum,  (voiced by Rob Paulsen) often shortened to "Banjo Possum" or simply "Banjo," is a cartoon character from the Warner Bros. animated television series, Tiny Toon Adventures. He rarely appears on the show.

Banjo is a young, gray and white opossum, who wears blue overalls and a brown and red hat. He is usually shown with his banjo, which he is very skilled in playing. He attends Acme Looniversity and lives in the swamps and backwoods with his kin folk.

He speaks with a thick Southern drawl.

Banjo has a good nature and gets along with everyone, despite growing up with a seemingly evil, carnivorous family. He is also fairly simple-minded, as he states before attending Acme Looniversity, "I'm gonna get me some edumacation."

Banjo and his family first appear in a sketch (parodying The Beverly Hillbillies) in the Season 2 episode, Acme Cable TV, where Montana Max loses everything to the I.R.S. and is forced to live in the swamp when Buster, Babs and Plucky tie him to a rocket and send him there. Monty crashes into a mud puddle that is near the possum family's rundown home, as they see him as a meal and chase after him. Banjo narrates the story by song while playing his banjo.

He and his family's actual debut was in the direct-to-video movie, Tiny Toon Adventures: How I Spent My Vacation, where Buster Bunny, Babs Bunny and Byron Basset travel down the river and end up in the backwoods where they meet Banjo (who is friendly to them) and his family (who wants to cook and eat them). After Babs is chased by Banjo's family while Buster plays numerous parts of his body in rhythmical tunes with Banjo (who is playing on the banjo), the bunnies make a run for it and go back down the river. Later, Buster, Babs and Byron are in trouble by Mr. Hitcher, blood-thirsty animals and a pack of gators who all want to kill, eat or harm them in some way (the gator sisters all want to marry Buster!), but Banjo rescues them by pulling them up in a tree with his tail. With only Mr. Hitcher on their trail, they go on a chase that ends up with them back at Acme Looniversity and Mr. Hitcher falling far down into the river (but only to come back later and terrorize Plucky at the school). Banjo attends Acme Looniversity from then on.

Banjo appears in the Season 3 episode, Music Day, as one of the Acme Looniversity students. In the opening wraparound, he joins Buster and his friends in their band, playing his banjo, and in the episode segment, The Horn Blows at Lunchtime, as one of the students who argues over who "cut the cheese," eventually leading to an all-out food fight. 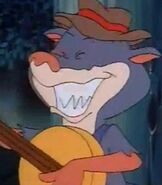 Banjo, Gogo, and Fifi in the prologue to the Music Day episode segment, Ruffled Ruffee

Add a photo to this gallery
Retrieved from "https://tinytoons.fandom.com/wiki/Banjo_Possum?oldid=41561"
Community content is available under CC-BY-SA unless otherwise noted.