Start a Wiki
The Alien Elders are minor characters on Tiny Toon Adventures. They appear in the episode, A Quack in the Quarks, where they live on Planet X. They are voiced by Frank Welker.

Appearances on the show

In A Quack in the Quarks, the Alien Elders send Frank and Ollie to bring back the bravest, strongest, and fastest Earthling alive, which Frank and Ollie think Plucky is after seeing him perform various stunts on Earth. It is revealed that the reason they sent Frank and Ollie to find the Earth's greatest warrior, is so that he will be able to defeat Duck Vader, the evil space tyrant. They then witness Frank and Ollie test Plucky in a giant paddle-ball shaped simulation, so they can prove to him that he qualifies as their new leader. Plucky is dizzy from the simulation, causing the Alien Elders to star angrily at Ollie, who assures them to be patient, as she and Frank guarantee Plucky will measure up. They begin the next test, which involves Plucky lifting a giant weight, only for him to get crushed by it. The Alien Elders then speak telepathically to Frank and Ollie, telling them they've seen enough, much to Plucky's relief, then speak telepathically to their guards, telling them to take Plucky away. They watch as the guards load Plucky, who tells them he'll bring them back a souvenir, into a magnet-shaped spaceship. Frank and Ollie beg for the Elders to give them another chance, and the Elders tell them that they will be joining Plucky in his quest to defeat Duck Vader. After Frank and Ollie are loaded, they launch the spaceship into orbit. They reappear towards the end of the episode, after Plucky has defeated Duck Vader, and declare telepathically that they proclaim Frank and Ollie their new leaders, for helping save their beloved planet. They then remove their robes, revealing golf attire under them, as they are going to retire and play golf. 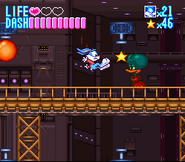 An Alien Elder in Buster Busts Loose
Add a photo to this gallery
Retrieved from "https://tinytoons.fandom.com/wiki/Alien_Elders?oldid=41325"
Community content is available under CC-BY-SA unless otherwise noted.