Acme All-Stars is a video game released by Konami in 1994 for the Sega Genesis/Mega Drive.

Similar to Wacky Sports, released on the Super NES and Game Boy, Acme All-stars is a collection of sports-related games that allows the player to make a team out of several of the iconic characters from the TV series. Each player has their own special ability, which you must gain to use. As you use these special techniques and shots, your ace power bar decreases. When the red portion of the bar is nearly full, your character begins sweating and is unable to use the special ability. When your ace power bar is completely empty, your character passes out. Ace power will be restored after a while, although each character's recovery speed is different. When the power gauge is full and the character stops sweating, press the C button (in default, as the controls can be changed in the options menu) to activate his or her special technique. Press the A button (in default) to deliver the ace shot that may knock down the goalie or sink a shot from across the court. Experiment to discover all the cool moves (excluding several characters).

Acme Looniversity is holding soccer and basketball tournaments to select members for an All-star team. Buster has gathered his friends, Babs, Plucky, and Hamton and headed for the stadium. Naturally, Montana Max is also slotted to play.

In story mode, you are limited to using Buster, Babs, Plucky and Hamton. Each of the games and mini-games follows the storyline, and the computer team is pre-selected.

Only Buster, Babs, Plucky, and Hamton can play this game. Race three laps through a course filled with obstacles to see who finishes first. Move the character using the D-pad while repeatedly pressing the A or C buttons. The faster you press, the faster you run. Items fall at fixed positions throughout the course to make the characters speed up, slow down, change position with another character, or become invincible against enemies. Since items are always changing their appearance, you never know their effects until you get them. When slow-running characters find themselves near the end of the screen, they are automatically returned to the center of the screen for a one-second penalty.

Only Buster, Babs, Plucky, and Hamton can play this game. This game takes place in Monty's Playroom, with a set of train tracks designed to look like a bowing course with gutters. The bowling is done horizontally, and the keys to getting a strike are the right speed and position. As the ball rolls down the lane, use the D-pad to control the ball's direction. The more speed you put into the ball, the harder it is to control. By setting the ball's speed to maximum and bowling a straight line (which is very difficult to do), you can deliver a super powerful hurricane ball, which will deliver a perfect strike. You have five rounds to get as many points as you can. In story mode, your opponents are Montana Max, Elmyra Duff, and Dizzy Devil.

This game is compatible with the Sega Team Player, a multitap that can plug into the Genesis that works with most Sega Genesis controllers to allow up to four players to play. When there are three or four players, then 1P and 3P are the team captains. These players will pick the team members in 1P/2P Vs 3P, or 1P/2P Vs 3P/4P games. Listed below are all the different ways to play the game, both with and without the Team Player. 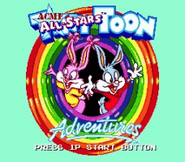 Basketball in the city

The cheerleaders in the halftime show

Soccer in the forest

Plucky flies the ball to the goal

Soccer in the Western

The American back cover

The European back cover