...while Buster and Babs have fallen asleep

Foghorn Leghorn with his new transfer students, Frank and Ollie

Plucky begins to take Frank & Ollie on a tour of school

"The picture of grace as I planted the old pole."

Frank and Ollie reveal themselves to be aliens

Buster, Babs, and Hamton on their break, just before the second act starts

"Patience, Plucky. These hero tests are merely to prove to the planet elders that you qualify as our new leader.

"That does it! We've seen enough!"

Plucky Duck with one of the Alien Elder's imperial guards 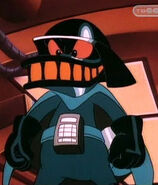 Babs uses one of Plucky's feathers to find him

Unfortunately, the feather tickles the computer, causing it to laugh uncontrollably

The Stormtwoopers create a storm on Plucky

...who destroys it with a few Sneezer-type sneezes

"I've been a bad computer!"

"Buster, Plucky's aboard that ship!"

Plucky reunites with Buster and Babs

"Phew! Good thing I always carry a can of this with me! Don't you wish everybody did?"

"Say, has anyone ever told you you smell exactly like 30-weight motor oil?"

Chewcudda is all tied up

...but a run-in with Duck Vader sets it to "DESTROY SHIP".

"And for saving our beloved Planet X, we proclaim you, Frank and Ollie, our new leaders. And we're history majors! Ta-ta!"

"Parting is such sweet sorrow."
Add a photo to this gallery

Retrieved from "https://tinytoons.fandom.com/wiki/A_Quack_in_the_Quarks/Gallery?oldid=43003"
Community content is available under CC-BY-SA unless otherwise noted.